A Texas Cowboy; Or Fifteen Years on the Hurricane Deck of a Spanish Pony 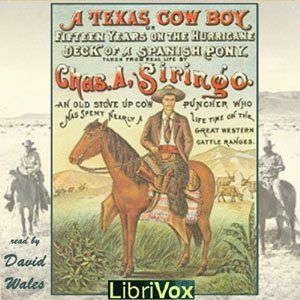 audio
A Texas Cowboy; Or Fifteen Years on the Hurricane Deck of a Spanish Pony

by
Charles A. Siringo

Reviewer: Speak up - favoritefavoritefavorite - January 31, 2016
Subject: Thrilling Adventure read by monotonous voice
The tale is said to be authentic but largely seems imaginary owing to the many instances of survival of the author through incredible odds of starvation, dehydration, accident and just plain "how could that be possible in one so young and inexperienced?" . Still, i found it 5-star worthy, but rated it at 3 stars because i did not at all care for the speaking style of the "reader" who enunciated clearly but in a plodding and monotonous inflection or rather lack thereof, causing this listener to feel quite heavy-lidded without reading a word. His speaking style would be better suited to religious texts.

Uploaded by librivoxbooks on January 25, 2014